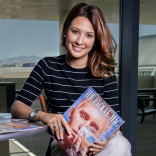 I realized that as the number of hours I spent sleeping decreased the number of questions I had about sleeping increased. It would have been a rare occasion for me to get 5 hours of sleep, which in time turned into my regular routine. As I started the process of tracking my sleep through wearable technology and consuming teas and herbal supplements to help me sleep, I noticed that a lot of people had questions similar to mine. Exactly for that reason, I reached out to Carolina Vazquez Mitchell, Founder and Chief Scientific Officer of dreamt, featured in our July issue, to ask all these questions for you

I hope that Mitchell’s responses to these questions, based on her extensive knowledge and experience, captured so thoughtfully with such sincerity, will serve as your guides. In this interview, you’ll read about how dreamt plays a safe and critical role to achieve a sleeping routine, and what Mitchell emphasizes as the areas to pay attention in order to sustain a healthy sleeping routine.

How do we sleep? What’s happening in our brains while we are sleeping?

Wakefulness is promoted by various structures in our brain. These structures are known as arousal parts. Sleep is promoted mainly by one structure inside of the hypothalamus called ventrolateral preoptic (VLPO) nuclei. Close to bedtime, the VLPO sends messages to the brain’s arousal parts and inhibits their activity. And vice versa when it’s time to wake up, the arousal structures inhibit the sleep-promoting part of the hypothalamus. The wake states are regulated by the neurotransmitters histamine, glutamate, acetylcholine, hypocretin, acetylcholine, norepinephrine, and serotonin. The sleep states are regulated by neurotransmitters gamma-aminobutyric acid (GABA) and melatonin.

Sleep in mammals comprises two distinct parts: rapid eye movement (REM) sleep and non-REM sleep. REM represents 20% to 25% of total sleep time and NREM sleep is usually 75% to 80% of sleep. REM sleep and deep sleep correlate with restful sleep. Non-REM sleep itself is divided into four stages: stage 1 is a transition from being awake, stage 2 is light sleep, and stages 3 and 4 are delta sleep also known as slow-wave sleep (SWS). Deep sleep represents from 25% of sleep in young adults to little or none in healthy older adults. The two phases of sleep (REM and NREM) repeat roughly every 90 minutes during the night. REM sleep episodes become longer, and deep sleep episodes shorter as the sleep period progresses.

Why is it so common to have a sleep problem?

As you rightly mentioned, sleep problems are widespread and affect about a third of the general population. Around 50 to 70 million Americans suffer from some form of sleep loss, and this has been shown to naturally worsen with age. We can only guess that the prevalence of this has been on the rise since the beginning of COVID-19.

Unfortunately, there is a cause and effect relationship at play here, with some of the symptoms of chronic sleep deprivation being a potential cause as well. Chronic sleep deprivation is associated with increased cortisol and decreased testosterone levels. A drop in testosterone negatively impacts the gamma-aminobutyric acid (GABA) and serotonin systems in the brain, which are linked to depression and anxiety. Increased serum cortisol levels are connected to depression, anxiety, hypertension, obesity, and diabetes type II.

How can we improve our quality of sleep permanently?

There are a number of simple “sleep hygiene” techniques that can improve the quality of your rest.

• Make sure your bedroom is quiet, dark, relaxing, and at a comfortable temperature

• Stop screen time at least 30 minutes before bed and try to remove TVs, computers, smartphones, and other screens from the bedroom

• Avoid large meals, caffeine, alcohol, and other stimulants before bedtime

• Get some exercise during the day; this will promote restfulness at night

What are the differences between treatment methods?

There are a number of widely used pharmaceutical drugs designed to increase our brains’ sleep-inducing molecules. However, a big problem with this method is the high tolerance produced by these drugs. This means that you need to ingest a gradually higher dose in order to achieve the desired effect. Another downside of this approach is that some molecules specifically increase one or two phases of the sleep cycle, but not the others. Alprazolam (Xanax) for example, decreases slow waves, increases fast waves, and directly reduces states 3 and 4 (deep sleep). It also reduces REM duration and REM frequency. Some of these drugs also produce unwanted side effects, with some zolpidem (better known as Ambien) users reporting unusual incidents or behavior.

Tetrahydrocannabinol (THC), on the other hand, increases deep sleep but can reduce REM. Cannabinoids also have less probability of building tolerance, and the withdrawal from cannabinoids is not as harmful as with pharmaceuticals, particularly Xanax.

How much dreamt should we use a month? What is its frequency?

Depending on the administration method, we recommend the equivalent to 5 mg THC and 2 mg CBD for low-tolerance users, which will be about three inhalations on our vape or 2 ml of our tincture (we have a beverage and a gummy coming as well, by the way). What makes our products effective at low doses is the addition of other sleep-inducing and REM boosters like melatonin, valerian root extracts, terpenes, GABA, l-theanine, and licorice root.

Does dreamt or any other sleep products (teas, pills, etc.) make us addicted? For example, if we use it for a month and cut the treatment, can we still sleep without them?

5 Tips to Promote Health During Spring

The root of addiction is the tolerance effect, which originates from the acquired insensitivity of the receptors. This means that a receptor (where a molecule binds and produces an effect) needs more of that drug to produce an effect. Some molecules lose their effect more quickly than others; therefore, they are considered “highly” addictive.  The higher the tolerance, the harsher the withdrawal effect will be.

Cannabinoids are not considered highly addictive. However, people can overuse them, creating an increase in tolerance. But if a person consistently uses low doses, they can prevent the tolerance effect. dreamt was designed to give the desired effect at the lowest dose possible to prevent any tolerance and withdrawal side effects.  Additionally, none of the other ingredients in our formulations have shown any addictive effects according to the research.

What are the ingredients of dreamt?

How and when did you decide to unveil the dreamt?

We launched in December with our 45-night pen. Our first store was Atrium, a beautiful dispensary in Woodland Hills. They have a lot of older and medical consumers so the budtenders have to be very well informed about the products and fully understand the science behind them. It was the perfect store for us to launch with.

Fast forward nine months and we’re in around 100 dispensaries throughout California. I have been to almost all of them to train the budtenders on the science behind our products, and cannabis in general. If customers are using cannabis to help them

Is there anything else you want to mention?

There’s a lot of hype and misinformation in the cannabis industry, particularly as it relates to the products and the science behind them. Something we have encountered time and again is the claim that CBN is an effective cannabinoid for helping with sleep. The science doesn’t support the use of CBN as an effective sleep aid, but that hasn’t stopped companies making claims about the effectiveness of their CBN products, or the consumers inquiring about it.

A mission of sorts for me and my company is to give cannabis consumers clear and honest information about the products that they are using. We are extremely proud of dreamt because the formula works, and the science supports that. As we introduce new brands aimed at pain management and anxiety we will take the same rigorous approach to ensure that our customers are completely confident with our products.

Get notified about exclusive offers every week! 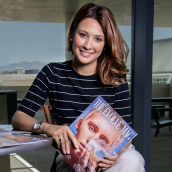 The Evolve Mag is a free high-quality digital magazine.
Read about wellbeing, career, and lifestyle content every month.

Reflect on Your Past to Thrive in the Future

Identify Your Values for a Purposeful Life

Know Yourself & Use Your Strengths

7 Ways to Set Yourself up for Success

Check Out the Other Posts

Signs About Your Personal Trainer by Jessica Mazzucco

5 Tips to Promote Health During Spring

Let Tea Take You for an Adventure

Dairy is Out Extra Virgin Olive Oil is In

Our Past is Not the Future, Looking Forward to Deeper Connections in 2021

Is Pandemic Making You a Chronic Worrier?

Celebrate the Best of the Season

How Parents Can Use Storytelling as a Superpower

How Parents Can Use Storytelling as a Superpower

Identify Your Values for a Purposeful Life

Get notified about exclusive offers every week!